View from the Forest Edge 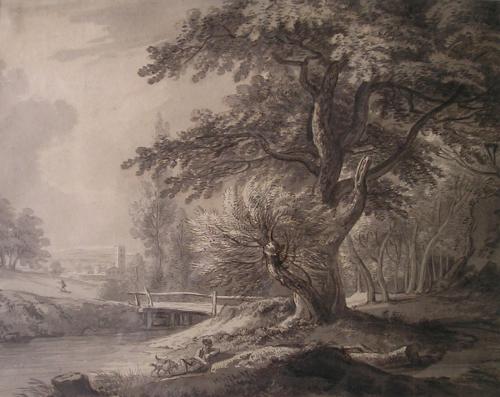 View from the Forest Edge

This was a favourite subject matter for Sandby and he would have tackled the scene very quickly. Colonel Gravatt records that he could work at great speed at such things: “Saturday 7 Dec, 1805 – Spent the day with my friend, Paul Sandby Esq., who made me a present of a painted sketch of an oak tree, which he painted whilst I was with him in about two hours”. With his constant study in Windsor Forest he had gained a thorough understanding of trees and their growth and in many of his larger drawings of tree subjects, trunks, branches and foliage are all dashed in with wide strokes of a reed-pen as with this picture. Closer detailing was with a fine point pen and shadows often washed in with India ink.

Colonel Gravatt was a close friend of Sandby and kept a detailed record of his working methods in a daily diary. Through his observations scholars have been able to appreciate and understand more the artists working methods. He built up a considerable collection of Sandby’s drawings and watercolours which were sold and dispersed after his death, the present wash drawing being one such picture.

Several of the Sandby’s descendents became collectors of their forbears’ work, most notably William Arnold Sandby (c1828-1904) who was Thomas’s great-grandson. Shortly before his death he assigned and bequeathed many examples from his collection to the Victoria & Albert and British Museums. The enormous residue was given to his cousin G.J.A. Peake, another great grandson of Thomas Sandby, who in turn left them to his son Hubert. Large portions of the collection were sold in two sales at Christies in 1959, where attention was drawn to the fact that what was being offered had come either direct from the artist or Colonel Gravatt.

Paul Sandby and his brother Thomas trained at the Military drawing office of the Tower of London and were engaged as draughtsmen on the survey of the Highlands of Scotland after the rebellion of 1745. In 1751 Paul went to live with his brother at Windsor Park where Thomas held the position of deputy ranger. Their work is similar in many respects but Paul was more versatile and a better artist, his work including lively figure subjects as well as an extensive range of landscape compositions. He was singled out by Gainsborough as the only contemporary English landscape artist who painted “real views from nature” instead of artificial picturesque compositions. He was a founder member of the Royal Academy and his brother was the first professor of Architecture. His work is well represented in the Royal Collection at Windsor castle.